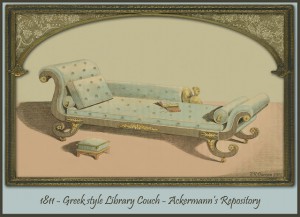 Austen enthusiasts are familiar with her novels, but what did the world of her time look like? Woodhouse—ah, yes, the name rings a bell, doesn’t it—will explore the fashions, furnishings, and other aspects of the material world that surrounded Austen and others of her time in both England and America.

The Metropolitan St. Louis Region of the Jane Austen Society of North America (JASNA–St. Louis) will host a free educational program on the material surroundings of their beloved author, Jane Austen, on Sunday, April 26, at the University City Public Library, 6701 Delmar Blvd., University City, Mo. The program will begin at 2 p.m.

JASNA – St. Louis is hosting this free program to further the understanding of the life and times of Jane Austen (1775–1817), who chronicled country and small-town life in her six groundbreaking novels: Pride and Prejudice, Sense and Sensibility, Mansfield Park, Emma, Persuasion, and Northanger Abby. Woodhouse’s presentation will highlight fashion, furniture, and domestic household items popular during Austen’s lifetime, not only in her native England, but also in the then-new United States. Refreshments will be served.

JASNA–St. Louis began in 1980 with just four members. Today, the organization has grown, not only in membership, but also in its program offerings. Every year, the region offers two free educational programs for the public and two special presentations for its members. This particular program is funded, in part, by a grant from the Jane Austen Society of North America. If you would like to learn more about supporting JASNA–St. Louis, how to become a member, or how to participate in the organization’s 2015 Janeite Social Calendar, visit www.JASNA-StL.org.

Anne Woodhouse’s interest in the 18th century was sparked when as an undergraduate she spent a semester at a Newberry Library seminar on the subject. Her graduate work at Stanford focused on the history of 17th- and 18th-century England and France. Her dissertation: a study of English travelers in Paris, 1660–1789, based on their travel diaries. She subsequently completed the graduate program in early American culture and museum studies at the Winterthur Museum, which added the history of material objects to her training. Her first museum job was at the State Historical Society of Wisconsin in Madison. In 1991, she joined the staff of the Missouri History Museum in St. Louis, where she specializes in art and domestic life, and is responsible for household furnishings as well as art. She selected and interpreted the objects on view in the Missouri History Museum’s current exhibit (25 October 2014–19 April 2015) on the Louisiana Purchase.