A Travelogue Through Jane Austen’s England

This event is free and open to the public. 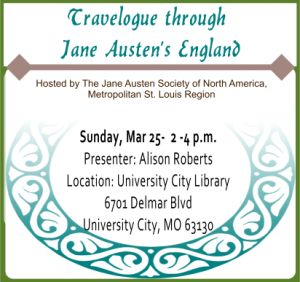 Last year, to mark the 200th anniversary of Jane Austen’s death, the Jane Austen Society of North America (JASNA) sponsored a trip to England. In the company of fellow JASNA members, tour participants visited houses, towns, and cities that shaped Austen’s life and fiction, including Winchester, Steventon, Chawton (where Jane penned most of her novels), and Bath. In addition, members travelled to areas associated with Pride and Prejudice, such as Derbyshire, the Midlands, and the Peak District. Other destinations included Chatsworth House, Lyme Park (Pemberley in the 1995 BBC adaption of Pride and Prejudice, in which Mr. Darcy took his famous swim), and Lacock (the location of many film productions such as Pride and Prejudice, Downton Abbey, and the Harry Potter series). Also, Winchester Cathedral, where Austen is buried, hosted a 200th anniversary service commemorating her death. With Alison, explore the places that helped make Austen such a beloved novelist.

JASNA–St. Louis member Alison Roberts has been a Jane Austen enthusiast since she was a teenager. Her favorite book is Persuasion. That preference extends also to the 1995 movie adaption of the novel with Amanda Root and Ciáran Hinds.