This event is free and open to the public 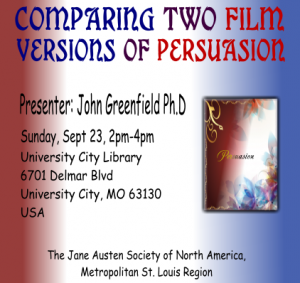 John will contrast two films based on Persuasion, Austen’s “autumnal” novel: Roger Michell’s 1995 version with Ciáran Hinds and Amanda Root as Captain Wentworth and Anne Elliot and the 2007 Masterpiece Theater production with Rupert Penry-Jones and Sally Hawkins in the main roles. Michell’s film places more emphasis on the sociohistorical aspects of the novel’s setting during the Napoleonic wars, including the rise of the professional navy officer class, while the 2007 production places the film firmly in the regency romance genre of Austen’s films and emphasizes the psychology of Anne Elliot. The films can be seen as complementary, John believes, each emphasizing valid but different aspects of Austen’s novel.

JASNA–St. Louis member John Greenfield earned his B.A., M.A. and Ph.D. degrees from Indiana University. He has taught at McKendree University in Lebanon, Ill., for 33 years and was awarded Professor Emeritus status in May 2017. At McKendree, John was a long-standing director of the Honors Program, faculty advisor to the Literary Interest Society and the Sigma Tau Delta honor society for English majors, and a recipient of the United Methodist Exemplary Teacher Award. He continues to produce scholarly papers, earning second place recently in the prestigious Keats-Shelley Essay Contest.