Jane on the Ten Pound Note 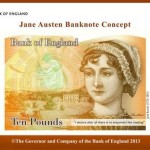 From our colleagues Linda Dennery and Meg Levin of JASNA’s New York Region, an update on a story that’s been percolating for several weeks. Apparently, we’ll need to wait a few years before we all acquire Jane Austen 10-pound notes:

Also from our New York Region, on the same topic:

Duplicated many million times on the new £10 banknote will be a line in praise of reading – it’s a shame it was uttered by an Austen character who had no genuine interest in reading at all:  www.guardian.co.uk/business/shortcuts/2013/jul/25/jane-austen-quotation-10-note