2015, September 26, Jane Austen’s Portsmouth And the Dynamics of the Price Family 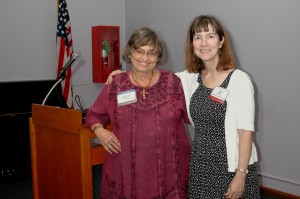 The presentations were offered by members Phyllis Thorpe and Toby Benis.

Last year, at JASNA’s Montreal AGM, Phyllis participated in a panel discussion, “Mansfield Park Pathologies,” moderated by past JASNA president and University of Colorado scholar and professor emeritus Joan Klingel Ray. Phyllis’ subject was “Fanny Price: the Lost Child in an Alcoholic Family.” On Sept. 26, Phyllis reprised her presentation before Toby’s exploration of the city of Portsmouth and its civic and military history.

With help from volunteers, who participated in a tableau, Phyllis explored the dynamics of the Fanny’s large family and the role each member played in it. (Fanny’s role: invisible child.) With an alcoholic father whose only interest seemed to be reading the navy news and visiting the dockyard, his family was left to its own devices. The result was a noisy, chaotic household with a mother often at wit’s end.

Thanks also go out to Phyllis’ partner, Dr. Andrei Laszlo, who was her able assistant, helping the tableau “come to life.” The tableau offered a perfect lead-in for Toby’s reflections on “Jane Austen’s Portsmouth.”

Fanny’s uncle, Sir Thomas Bertram, had sent Fanny back to her family in Portsmouth as punishment for not consenting to marry young, rich Henry Crawford. Sir Thomas hoped that a re-acquaintance with the noise, poverty, and disorder of the Price household would make Fanny realize what she could have with Henry.

Toby, a professor of English at Saint Louis University, reminded her listeners that most of Austen’s novels are set in the bucolic countryside—think rolling hills, picturesque villages, and quaint farms—not in a congested, dirty, urban environment. With the use of period maps and quotes from Edward Daniel Clark, a Georgian clergyman, naturalist, travel writer, and contemporary of Austen, Toby highlighted the background of Portsmouth and explained its importance as a city and a navy base, especially during the French Revolutionary Wars and the Napoleonic Wars (1792–1815).

Portsmouth, Toby said, was called the Key of England because of its enormous strategic importance. Yet its civic boosters envisioned it as a spa town also, she added, but despite its coastal location and the new craze for seaside spas, Portsmouth was, in the eyes of many, not a sufficiently healthy environment for R&R. It lay low on the coast, with backwaters and ditches creating “bad air.” It was awash in soldiers, marines, sailors, and dockyard workers. Its bars were always full (and overpriced, according to contemporary accounts) and the area was considered damp and “aguish.” Fanny, at age 10, leaving such an environment to live at Mansfield Park, is deemed in poor health. Her cousins, by comparison, exhibit a healthy glow and are pictured as advanced for their age.

Fanny, as a near-adult returning to Portsmouth, finds herself banished to an unhealthy environment and an unpleasant situation concerning space, sound, and air. Her living quarters in the Price house are cramped; there is constant noise; and the house is disorganized and never tidy. She misses the order and gentility of Mansfield Park and, not surprisingly, grows despondent.

Yet now on her own, but also having benefited from Edmund’s influence, Fanny grows up while confined to Portsmouth and her parents’ household. She makes a space upstairs for herself and her sister Susan to read and contemplate, and she helps create some order downstairs (e.g., the silver knife episode).

Finally, in discussing Portsmouth—as well as Fanny and Edmund—Toby highlighted one of the “evangelical” themes of Mansfield Park, pointing out the difference for evangelical advocates between the city (Portsmouth) and the village (Mansfield Park). In the novel, Edmund observes that the city dilutes the efficacy of the clergyman because his parishioners cannot observe his behavior. He believes strongly that a clergyman should lead by example and that he should know his people and his community, and this is best accomplished in an environment where a clergyman is in daily contact with his parishioners, i.e., in the country. Fanny, in Portsmouth, comes to imitate Edmund’s preferred clerical conduct by initiating a well-regulated home.

Toby noted that from an evangelical perspective, Fanny’s evolution in Portsmouth highlights the influence of women in the home by illustrating her sense of obligation and gratitude, her devotion to duty, and her help in the shaping of Susan’s character.

Toby’s presentation was not only informative about Portsmouth and the setting for the chapters about Portsmouth in Mansfield Park, but also about how much Fanny grew and matured during her sojourn in Portsmouth. You might say the plan that Fanny’s Uncle Thomas concocted to bring Fanny to her senses served its purpose, but not in the way he anticipated. Also, one can see why the novel is often called an evangelical novel, or a novel of morals.

The two presentations fit together, hand in glove; they certainly precipitated some stimulating conversation afterward. One member wrote in an e-mail, “I thought the talks were wonderful, and I so enjoyed the conversation after. [I am] looking forward to participating more.”

Another wrote, “This afternoon’s JASNA meeting was just wonderful. I learned so much. It really adds depth to the novel to have this background.”

As both Phyllis and Toby noted, one can find something new each time Mansfield Park is read.

It would have been interesting to see how Austen continued to evolve as a writer had she lived longer.