NewsNotes Summer 2013: From Our Regional Coordinator

Happy summer! As I write this column in late April, it seems as though summer will never come. Our spring has been a wet and cold one, but that has not dampened our spirits. Much has been happening in the world of Jane Austen.

In February, members of our local region attended a dramatization of Sense and Sensibility at the Repertory Theatre of St. Louis – and our reactions were mixed. As always, many of us were amazed that anyone could distill a full novel into a two-hour performance. Many also were surprised at the casting: Marianne seemed over the top (too loud), Willoughby a bit of a “frat-boy,” Mrs. Dashwood more like a Mrs. Bennet. Many, though, agreed that Elinor was a hit. There were various reactions to the fast pacing (almost Shakespearean) that kept the drama moving but made it difficult for the language of Austen to be understood. The use of a door was important in the play’s minimalist staging, as was the lighting and music in the separation of the scenes. One member felt that Jon Jory, who adapted the novel for the stage, turned Austen’s satire into farce; and the voice of the narrator was missed by another. The consensus: It was not as successful as the Rep’s adaptation of “Emma” several seasons ago. 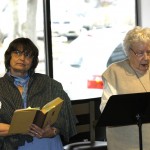 In March, we gathered for a reading of our favorite scenes from “Pride and Prejudice” at The Tavern of Fine Arts. This was to celebrate the 200th anniversary of the novel’s publication. We spent an entertaining three hours eating and reading – and enjoying a special “Bennet” cocktail created for the occasion by the tavern’s staff. Phyllis Thorpe brought along several guests, who portrayed different characters in the scenes, and our own Shirley Bassett delivered a most haughty Lady Catherine. We were able to greet several guests who came to listen and participate.

In April, Jim and I spent a lovely afternoon in Kansas City, attending an “Afternoon at Pemberley” organized by the metro KC Region. Iris Lutz, current JASNA president, delivered a presentation on famous houses in England (including some that were visited or lived in by Austen). If you were very rich, Lutz noted, you could show off your wealth by boasting a mansion full of windows (windows were taxed). And, said Lutz, our modern idea of a cottage is nothing like the Barton “cottage” the Dashwood women inhabited in Sense and Sensibility, with its parlors, back offices, kitchen, multiple bedrooms and servants’ quarters.

Costume designer Nancy Robinson’s beautiful handmade dresses and men’s clothing demonstrated just how difficult it was to own fashionable clothes in Austen’s time. Robinson has designed costumes for many stage, movie, and TV projects and specializes in period costumes. She and JASNA-KC member Gaye Stevick have worked on several Regency costumes for Stevick to wear at different Jane Austen functions. Stevick, Robinson, some mannequins, and a friend, actor and musician Wes Studi (who played Magua in the 1992 film version of The Last of the Mohicans), all modeled the different outfits: a typical day dress, a walking dress, ball gowns, and a gentleman’s ball costume, complete with gloves and monogrammed stockings.

Dr. Sheryl Craig’s presentation, “The Whigs of Pemberley,” was an eye-opener, showing just how much Jane Austen understood about the politics of her time and how she used that knowledge in her novels. William Fitzwilliam, fourth earl of Fitzwilliam (1748–1833) was one of the richest men in Regency England. He lived in Yorkshire and gained a reputation as a philanthropist. He also supported the Poor Laws as well as efforts to create a national minimum wage. Dr. Craig, a faculty member at the University of Central Missouri, pointed out that like the real-life earl, the character, Fitzwilliam Darcy, is from the north and is philanthropic. He is, as Mrs. Reynolds points out, “… the best landlord and the best master that ever lived.” Also, Whigs in Austen’s time wore blue coats, and the Bennet sisters note on first observing Bingley that he wears a blue coat. Later, at Rosings, why are Darcy and Colonel Fitzwilliam visiting their aunt in March? Because that is the time for signing contracts and she, as a woman, was not allowed to do that. The law stipulated that the men in the family must perform those duties. Craig’s presentation went on to include an explanation of Elizabethan Poor Laws, a parish’s obligation in aiding the poor, and a lively discussion revolved around the abolition of slavery.

The presentations, company, and food were fabulous.

In June, our region’s members will meet for a luncheon and to discuss Pride and Prejudice. It will take place on June 8 from noon to 3 p.m. at the home of Bettye Dew. There are many facets to the book, not the least of which is the characters and their relationship with one another, and the changes they go through (or not). Themes abound: Of course, there is pride and prejudice, entailments, marriage for love or for security, and the latest – game theory. Who schemes for what purpose? Make sure you come for delectable food and conversation.