Did Jane Austen Prefer a Plain Dish to a Ragout? 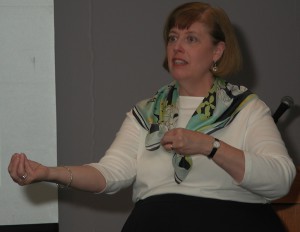 Such was the question posed to the audience at the Jane Austen Society of North America, St. Louis, meeting that took place September 27, 2014, at the University City Library.

It was posed by Julienne Gehrer, a professed food journalist, who has written two cookbooks:  In Season: Cooking Fresh from the Kansas City Farmers’ Market and Love Lore: Symbols, Legends and Recipes for Romance. She is now researching her third, Dining with Jane Austen, a three-year adventure into the culinary world of Jane Austen and her contemporaries.  It has proven to be an amazing history of food: its preparation, preservation, and styles of consumption. With beautiful photos, extensive knowledge, and a sense of humor, Gehrer was about to take us on this same gastronomical adventure with Jane Austen.

Gehrer’s resources are threefold: Austen’s letters, her friend Martha Lloyd’s Household Book, and the Knight Family Cookbook.  From these she has extracted many interesting facts about Austen’s youth and travels later in life that took her to different towns and rich estates, including Godmersham, home of her brother, Edward, who had been adopted by wealthy relatives.

At Steventon in Hampshire (Jane’s family home), her father (who was not only a rector but also a farmer) kept sheep for mutton; her mother was in charge of the poultry and dairy.  Austen grew up in a rural and self-sustaining environment.  Dishes at the table of a middle-class family were simple and at a family dinner usually numbered three.  One such family dinner might be Pease soup, spare rib, and New College Pudding (the oldest recipe for pudding that exists – c. 1617).  For company, there would be six dishes.  This is very different from wealthy landowners who often employed chefs from France.  These French chefs brought with them their love of complex dishes (such as ragout), as well as a penchant for large and well-organized kitchens.

While living at home, Jane enjoyed such dishes as toasted cheese, souse (meat boiled from a pig’s head), and Meade from honey.  But with her travels later in life, Austen was able to savor a broader range of dishes.   At Godmersham, Jane experienced venison, ox cheek (a rich, flavorful meat), dumplings, and carrots.  In a letter from 1799, she mentions asparagus, lobster, and cheesecake.  While living in Bath Jane enjoyed Bath Buns, and at South Hampton, fresh fish: cod and soal (sole).  And yes, she did try veal ragout and haricot mutton, both French dishes.

Having experienced these new dishes and recipes, Jane became more adventurous herself.  She enjoyed orange wine (made with Seville oranges), seacale (Sea Kale), and a new “garden stuff” (the term “vegetable” came a bit later) called tomata or tomato which had been used previously only for garnish but now was being eaten as well.

Certainly Jane Austen’s travels around England and exposure to French cooking gave her a wider range of dishes to enjoy.  So…which did Jane Austen prefer – a plain dish or a ragout?  Julienne Gehrer thinks most decidedly a ragout!