Highlights from “The Material World of Jane Austen’s Time”

Curator of Domestic Life at the Missouri History Museum 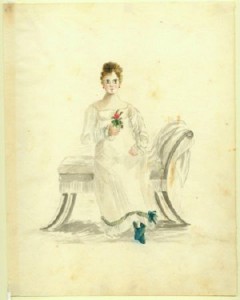 We have a pretty good idea of Jane Austen’s England during the late eighteenth and early nineteenth centuries. But what did things look like here in America, especially around St. Louis? Anne Woodhouse, Curator of Domestic Life at the Missouri History Museum, helped us unlock those mysteries as well as make comparisons between England and America during that time.

Through the use of a beautiful and well-organized slide show consisting of sketches, paintings, water colors and silhouettes, as well as photos of existing artifacts, and through quotes from Austen and from books about her, Ms. Woodhouse took us on a journey from England and the civilized world of Austen to the wilds of America and the St. Louis region.

We saw the dress of Regency England – short and puff-sleeved, high-waisted dresses with curls around the faces of young women. Pictures of furniture, small and simple: round tables, straw-seat chairs, a lap desk similar to the one in which Jane could hide her work if she was disturbed while writing.

We viewed maps of Austen’s England, where she lived and how she lived, how she traveled – stage coach or post chaise and, of course, how people entertained themselves during her time. Dancing was chief among these entertainments. We saw paintings of these dances, and one can find many quotes from almost all of Austen’s novels telling of balls and dances.

In contrast, little is known of that time period in America, specifically the area around St. Louis, Fort de Chartres, Ste. Genevieve, and Cahokia. This area went back and forth between France and Spain before being bought by the United States. So the French influence was unmistakable.

In the sketches and watercolors of Anna Maria von Phul (who came from Kentucky to visit her brother), a wealth of information about people and places can be gleaned. Ms. Woodhouse explained that the informal water colors give us an insight into everyday life in this region. Clothes and hair were very similar to that of their European counterparts. But Creole style often included wrapped heads for women, skeleton suits (a one-piece outfit) for young boys, moccasins, and the use of Indian blankets as a wrap or jacket. 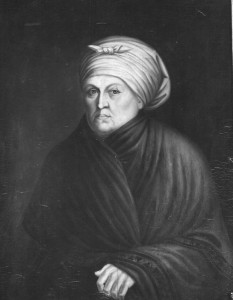 The more well-to-do, as in Europe, had their portraits painted. Madame Chouteau, the matriarch of the Chouteau family, could be seen in one portrait wearing both a scarf wrapped around her head and a plain black shawl, but with elaborate embroidery – something only the rich could afford.

Much was yet to be manufactured in America, but silver could be obtained locally and many people enjoyed silver ornaments in the form of jewelry and buttons on their clothing. However, cotton was not easily obtained and, as with many other articles for everyday use, had to be imported.

Scenes of houses in St. Louis and Ste. Genevieve drawn by von Phul showed the French style of building construction – logs placed vertically rather than horizontally. The Bolduc House in Ste. Genevieve is of this style and can still be toured today.

We were able to see several artifacts from the time period built in the French style, such as an armoire using the French ball and claw foot. Snuff boxes honoring Napoleon were also a popular item. One interesting artifact was the cellaret (a cabinet for bottles of wine or liquor) and it was noted that “all the best men got drunk around it.”

Dancing was popular here in America as well as in England. The Creole style of dancing was, as expected, quite popular. There is one story of a dancing party that took place in Arrow Rock. It started as a celebration for one thing then another and yet another until it lasted for two days and nights.

An important influence in America was that of Native Americans, especially in dress. Examples of these would be the use of moccasins, blanket coats, and buckskin coats with embroidery made of porcupine quills. Many people wore a mix of European and Native American dress. We were shown a silhouette of Auguste Chouteau wearing a dapper European suit and hat, and instead of boots, very comfortable looking moccasins – being both stylish and practical.

And so our journey ended. We traveled from the civilized world of Jane Austen, in England to the wilds of French America. Some things were similar, but with a new civilization being created and the scarcity of goods making necessity the mother of invention, much was different.

For more information on Anna Maria von Phul’s works and life in St. Louis, see the link below, a blog by Barbara Wells Sarudy.