Jane Austen Society of North America–St. Louis » JASNA - St Louis » Kara Louise: How She Came to Writing and Jane Austen and Where It Led

Kara Louise: How She Came to Writing and Jane Austen and Where It Led 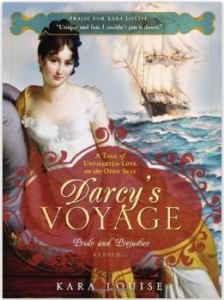 On June 6, members of the St. Louis Region of JASNA and their guests congregated at the lovely home of member Bettye Dew to enjoy one of her delectable luncheons and then a delightful presentation by author Kara Louise. Ms. Louise (her pen name) recounted the story of her exploration of writing; from one line in fourth grade (as a reaction to a painting) to three pages of a story many years later to three chapters inspired by genealogy research even later. That was where it seemed to end.

Kara Louise also researched online sites and decided to write, not sequels, but as she calls them, variations on Pride and Prejudice. She is fascinated with the characters and wants to write stories from their points of view and to put them in different situations.

This has led to several Darcy and Elizabeth stories, several which begin with Elizabeth’s refusal of Darcy’s proposal during their meeting at Rosings. She states that her books have no order or sequence, instead they are independent stories. In Darcy’s Voyage the two meet crossing the ocean. That was inspired by the story of the Jeanie Johnston (a ship famous for no loss of lives in its voyages) and Two Years before the Mast by Richard Henry Dana, Jr. That research also inspired Pirates and Prejudice.

Even so, some research can lead to dead ends or closed doors, as when Kara Louise wanted to use deafness and sign language in a story but found that sign language had not yet been invented in England during the time period of her novel. This has not deterred Kara Louise who has used Pride and Prejudice: An Annotated Edition, Patricia Meyer Spacks, editor, and the novels of Georgette Heyer for further research. These have inspired stories involving other characters of Austen’s such as Anne de Bourgh and Harriet Smith.

What is ahead for Kara Louise? Well, she is certainly far from finished.   She has started an Emma – inspired story revolving around Harriet Smith and is very interested in one based on Persuasion. All this interested attendees who had read some of her novels while others were ready to do so. One such attendee, a librarian, could not believe she had no titles by Kara Louise at her library and was sure to remedy that situation.

Kara Louise shared several of her favorite research sites with attendees. And who knows, some may have suddenly become bitten by the writing bug. After all, as she pointed out, information leads to inspiration.

Kara Louise’s novels are mostly self-published with two that were picked up by Source books. You can find them at her website: http://www.karalouise.net/