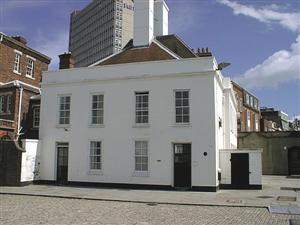 In Mansfield Park, Portsmouth, the home of the Royal Navy, is the backdrop for a rare urban interlude in Austen’s novels. Reflecting popular perceptions of Portsmouth as a place of bad air and ill health, the town’s atmosphere literally makes Fanny Price sick. It also reminds her of the coarseness of her family’s working-class naval culture. Fanny responds by bringing an evangelical Christian ethos into the management of the Prices’ household affairs. In this way, Fanny’s behavior testifies to how carefully she has absorbed the religious convictions of her cousin and romantic interest Edmund Bertram, himself destined for the priesthood.

A professor of English at Saint Louis University, Benis teaches classes in British Romanticism, 18th- and 19th-century women writers, and women’s and gender studies. She has published two books on Romantic-era literature and culture—Romanticism on the Road: the Marginal Gains of Wordsworth’s Homeless (2000) and Romantic Diasporas: French Émigrés, British Convicts, and Jews (2009). She is now researching a monograph, tentatively titled “Jane Austen’s Neighbourhood,” that explores small-scale ideas of community that fall between the microcosm of the country estate or village and the macrocosm of the nation or the empire.